Location monitoring for health and safety at British Gypsum

CSE Chatterbox designed and installed a CALM+ radio system using Motorola Solutions Capacity Plus with TurboNet dispatchers for British Gypsum’s plaster board production site in Sussex. Heavy equipment, rocks etc. make the site inherently hazardous so health and safety were the primary drivers for upgrading the existing system to a new system with location monitoring.

CSE Chatterbox has also designed and installed a public address system based on Motorola Solutions radios, which interfaces with the radio system.

British Gypsum, part of Saint-Gobain, offers a range of plasters, partition, wall lining, floor, ceiling and plasterboard systems for the residential, commercial and off-site sectors of the construction industry.

The company’s site at Robertsbridge, East Sussex spans over 1000 acres. In addition to the plasterboard processing plant, warehouse, offices and a purpose built three-mile-long conveyor from the plant to the Brightling gypsum mine the site is also home to an ancient woodland and a fishing lake.

This world-class manufacturing facility supplies gypsum products for the building industry for the south of England. 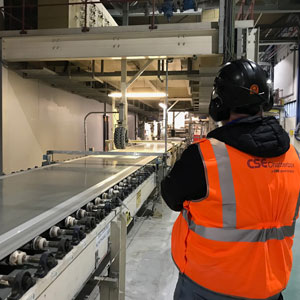 Health and safety are a primary concern at British Gypsum’s Robertsbridge plasterboard processing plant, where heavy machinery and dusty confined areas add to regular health and safety issues and create a hazardous environment . The need to monitor the location of radio users and ensure a prompt response should an incident occur, was the primary driver for British Gypsum’s decision to replace their existing analogue MPT 1327 two-way radio system. The escalating cost of maintaining a fleet of increasingly obsolete radios was an additional driver.

The main focus of the facility is the plaster board production line, a 400-500m processing system which takes the locally mined gypsum in rock form, crushes it and adds water, mills it, sandwiches it between two paper layers and bakes it. This is served by a railway bringing in the gypsum, a storage area/homogeniser for storing crushed rock and a warehouse with an articulated loading bay for distributing the finished products.  There are also offices and warehouses. CSE Chatterbox has designed and installed a CALM+ system to provide communication and location monitoring for the whole facility and arranged all the required Ofcom licences. 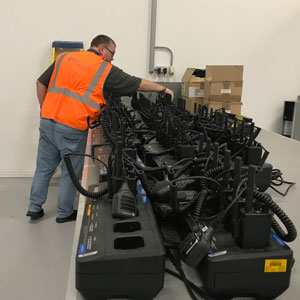 The new CALM+ system, which covers the whole of the 1000-acre site, supports over 120 hand portables, plus Atex hand portables, vehicle mounted radios and local bases. It uses dynamic channel allocation to make the most effective use of the six voice channels on the system  – five groups and one dedicated emergency channel. Four repeaters carry the voice channels, two channels per repeater plus an additional channel for resilience. Data has a dedicated channel, which can also be used for voice if required.

Motorola Solutions TurboNet dispatchers in the site managers’ office, engineering management office and weigh bridge enable on-screen monitoring of all radio users’ locations. The TurboNet dispatchers, linked by the 4G network, have the potential to see and share the same information but each has been tailored to the needs of the user. For example, site managers can make and receive calls from their dispatcher while the weigh bridge and engineering management do not have this facility. 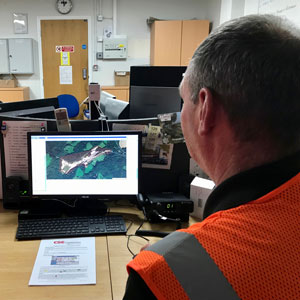 Radio users working at the facility are monitored inside via Bluetooth, while GPS monitors their location outside using a dedicated network. Radios are programmed with Lone Worker and Man-Down and have panic buttons that raise an alarm and shows the user’s last known location on the dispatchers when pressed. GPS Location monitoring is accurate to within one metre. This ‘last known location’ feature is also useful for recovering lost radios by starting the search where the signal stopped.

“British Gypsum is very serious about on-site safety. The investment in the new system with location monitoring is a very important part of providing for the safety of our staff at Robertsbridge.”

British Gypsum, Robertsbridge is a 24/7 facility, which made working closely with the client to coordinate safe access essential. Access was often restricted to a few hours and weekend work was required.

CSE Chatterbox is SafeContractor accredited and understands the importance and value of this to both its employees and clients. Being a SafeContractor meant that the engineers working at British Gypsum were able to go on a rapid induction and did not have to be accompanied around the site during the installation.

To work safely and within the client’s requirement on site at British Gypsum CSE Chatterbox engineers had to familiarise themselves with the site’s health and safety rules, acquire new PPE and work in noise cancelling active headsets when required.

British Gypsum employees are trained to challenge any practices they feel could be improved. The CSE engineers found this a very positive attitude.

“British Gypsum’s concern for health and safety at Robertsbridge is exemplary. I have rarely been on a site where there is so much attention paid to ensuring good practices.”

“The peace of mind of having a company that will sort out my radios quickly is a big advantage to me. We have had experience of waiting weeks for a site visit or to get faulty radios repaired and returned.”

The CALM+ system CSE has designed offers the potential for integration with other systems, including fire and smoke alarms, SCADA, BMS and MCM systems. Should the Robertsbridge plant want to integrate with other systems, or make any other upgrades, in the future the equipment and the  managed service contract can be upgraded to include any new provisions. 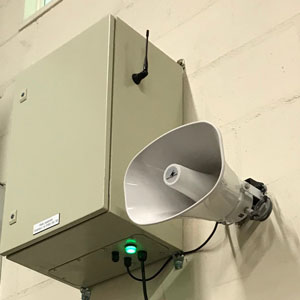 Whilst CSE Chatterbox was designing the new radio system, British Gypsum had issues with their onsite public address (PA) system, which is primarily used for fire alarm test warnings. The majority of the tannoy speakers around the site were unreliable.

CSE Chatterbox designed and installed a bespoke wireless public address system to cover the site and interface with the CALM+ system, providing British Gypsum with a cost-effective solution.

The PA units were designed and­ built by CSE Chatterbox. They use two-way radio handsets to receive messages, which are then broadcast using amplifiers and horn speakers, with each radio serving two or more speakers. In the offices, where amplification is not necessary, the PA units just have a radio and speaker. If any PA unit loses contact with the system, it will sound an alert and remedial action can be taken.

The design and installation of the CALM+ and PA systems at British Gypsum, Robertsbridge perfectly illustrates what CSE Chatterbox does best – understanding a client’s business and working with them to find a solution that meets and goes beyond their original expectations.

“CSE Chatterbox has considerable experience in bespoke solution systems, and they took time to research and demonstrate how our system could work before tendering.”