As a place of worship Westminster Abbey requires a discreet and effective solution to the communication of fire and intruder alarms. A CSE Chatterbox Alarm Location Monitoring (CALM+) system provides it. 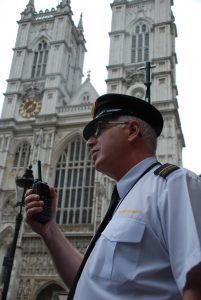 Westminster Abbey is one of the most important and iconic buildings in the UK. The site has been the setting for every Coronation since 1066 and for numerous other royal occasions, including sixteen royal weddings. Some of the most significant people in the nation’s history are buried or commemorated at the Abbey, and it is the final resting place of seventeen monarchs.

The present church, begun by Henry III in 1245, is one of the most important Gothic buildings in the country, and it is a treasure house of paintings, stained glass, pavements, textiles and other artefacts. In 1987 Westminster Abbey was acknowledged by UNESCO as being of great historic and symbolic significance, and inscribed as a cultural World Heritage Site.

Every year Westminster Abbey welcomes over one million visitors who want to explore this wonderful 700-year-old building. Thousands more come to worship at the daily services.

Protecting Westminster Abbey, its contents and visitors is a priority for management. The ancient structure of Westminster Abbey contains a significant proportion of old, dry and highly flammable timber. Reacting quickly to any outbreaks of fire is obviously crucial to the safety of visitors, and essential to minimising damage to the building and its contents and preventing the spread of fire to the surrounding, and also historically important, buildings.

As a living place of worship the use of audible fire alarms would be intrusive and undesirable. Westminster Abbey’s two-way radio system must therefore communicate quickly and discreetly to security staff.

As a secondary challenge Westminster Abbey is a Grade 1 listed building, which places constraints on how radio infrastructure can be installed.

A discreet and effective solution

Westminster Abbey has been a client for many years. The end of the Abbey’s existing rental contract triggered a review of their system and the opportunity to take advantage of advances in technology.

One of the primary purposes of the system is to notify security staff to fire or intruder alarms. This is crucial given there are no initial audible alarms.

The CALM+ system uses an alarm processor on the fire and intruder alarm panel to monitor changes in current, with a change indicating that an alarm has sounded. Under the original system, when the alarm processor detected an activated alarm security staff would receive predetermined verbal and text messages on their radios. They would then go to the panel to check which alarm had been activated in order to obtain the location of the incident.

The new CSE Chatterbox Alarm Location Monitoring (CALM+) system incorporates a significant benefit over the one it replaces. Under the new system security staff receive predetermined verbal and text messages that identify which alarm has been activated. This means that they can save valuable response time by going directly to the relevant area. Only one person need attend to the control panel, maintaining contact with the team by radio.

Every second saved in responding to a fire at Westminster Abbey is critical so the improved response time made possible by the new system is a genuine benefit.

The new system enables a quicker response, which could be crucial to minimising damage, and it also enables better management procedures. Westminster Abbey has a predetermined time delay on its system, based on a site specific risk assessment by the fire service, i.e. there is a window between an alarm being activated and an alarm being communicated to the fire service. If security staff can get to the site of the incident in that window and identify a false alarm or deal with a small, manageable fire they can prevent a false alarm call out, save on charges and maintain credibility and good relations with the emergency services.

Working in a listed building

In installing the new system CSE Chatterbox worked closely with management at Westminster Abbey to ensure work complied with listed building requirements. For example, the alarm processor, which needs to be adjacent to the control panel, and the repeater, which needs to be near the antenna which is on the roof, have been connected by Wi-Fi to avoid trailing wires through the building.

In addition to security staff, who use Hytera PD785 radios with display screens, the system also supports 75 Hytera PD705non-display radios used by works staff, marshals and conservators, and several small, discreet Hytera PD375 radios with displays used by managers. Westminster Abbey has a virtual control room. Managers can access the system from anywhere via Wi-Fi or 4G using Windows based tablets. From the tablets managers can:

CALM+ goes beyond the provision of two-way radio communication to incorporate other functions offered by two-way radios and the systems that can be integrated with them. Solutions are bespoke to each customer and their requirements. Experienced Chatterbox personnel consider the customers existing way of working, listen to their requirements, look at the technology available and build a solution appropriate to the customers business needs.

We have worked with CSE Chatterbox for over 15 years. The team understands our requirement and provides a dependable, professional service.

Thank you to staff at Westminster Abbey for their help in creating this case study.

We use cookies to ensure that we give you the best experience on our website. If you continue to use this site we will assume that you are happy with it.OkRead more