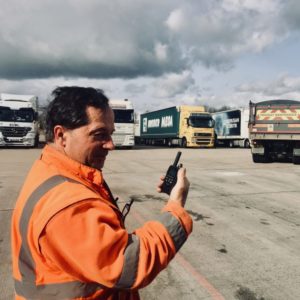 TurboVoice, using Icom LTE/4G PoC technology, has provided an effective solution for ChannelPorts, overcoming the challenges of the topography at their busy freight clearance centre.

ChannelPorts Freight Clearance Centre at Folkestone Services is the leading neutral Customs clearance agent in the UK. It provides a complete customs clearance service for trucks through the Port of Dover and the Channel Tunnel carrying cargo to and from non-EU countries, simplifying the customs clearance process by removing the need for a third party such as a port authority. ChannelPorts carries out in excess of 3000 clearances per month.

A radio system providing clear, reliable communication is essential to the ChannelPorts team. Staff working outside use the radios to manage vehicles for clearance and handle the allocation of the 200 spaces spread across the coach, lorry and lorry overflow car parks efficiently to cope with the daily excess of vehicles needing parking. Radios are allocated to staff at the beginning of the shift. 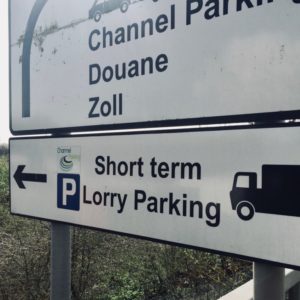 The radios also form part of ChannelPorts’ health and safety provision. Should the team have to deal with an incident, vehicle fire, which is a very real threat given the fuel and potentially flammable cargo, or an abusive visitor they can summon and coordinate assistance using the radio system.

ChannelPorts invited CSE Chatterbox to carry out a survey of the site with the intention of investing in infrastructure to overcome this however even when CSE Chatterbox added a repeater communication between the two parts of the site was still not perfect.

CSE Chatterbox decided to repeat the survey using Icom’s new 4G/LTE radios. This achieved good coverage and excellent audio quality and the cost of 4G/LTE, including Icom SIM cards, proved to be a cost-effective solution against the cost of a licence and infrastructure for a conventional system.

ChannelPorts bought Icom IP501H radios, which use cellular network coverage provided by LTE/4G and 3G networks to provide stable communication throughout the site. The control room has a charger cradle with Bluetooth function and speaker microphone as a desk top despatcher. 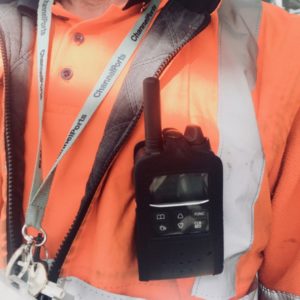 The ChannelPorts team, including managers, the outside team and the office, had been using digital simplex back to back radios to maintain communication whilst moving around the Folkestone Services site, however the topography of site became an issue when the facility was extended. Although the area to be covered is not extremely extensive, a ridge of land between the Folkestone Services and newly extended lorry park made communication using their existing back to back system between these areas challenging.

Network coverage is provided by custom Icom SIM cards, which enable the system to fall back to a 3G network if 4G is unavailable. The one caution for all systems that rely on the cellular networks is that they’re only as reliable as the network coverage, but this 4G/3G roaming SIM card, which provides access to all four major cellular networks in the UK giving extra resilience in case a network provider has issues, gives Icom the edge in ensuring the most continuous coverage possible.

The robust IP501H handsets with IP67 rating can withstand the demands that the team and weather will put on them, they’re ideally suited for the job:

Radios are the right solution for us. The team are used to just pushing a button to talk to everyone at the same time and they need something that can withstand heavy use and bad weather. These are work tools not something people want to carry around when they’re not working.

The IP501H radios offer full duplex communication, i.e. telephone type conversations where both parties can talk at any time, rather than the traditional one-at-a-time radio conversation punctuated by ‘over’. All users can be on the system at any one time and can make one-to-many group calls between themselves as well as one to one calls. If required, managers can jump in on any or all conversations at any time.

For health and safety, the radios have an emergency button which raises the alarm on the manager’s radio when used and opens the audio channel so that the manager and everyone else on the system can hear what is happening to the radio user, particularly useful when handling confrontation. The radios also have built in GPS so ChannelPorts could add tracking in the future.

Being able to use the radios while off site is an added bonus. Within days of the system going live we had made use of this, staying in contact whilst at a meetings in Doncaster and down at Dover docks.

Although it was not part of ChannelPorts’ original brief the new cellular system gives them the additional benefit of coverage while down at Dover Harbour, or anywhere else in the country or even abroad provided cellular coverage is available, and it is expandable should this be relevant in the future.

The Icom 4G/LTE radios supplied by CSE Chatterbox have over delivered against our initial brief, providing excellent audio quality and wider coverage. Getting them up and running  was quick and easy, so we’re very satisfied.

Two-way radios with the coverage of a mobile

For this application Icom 4G/LTE radios have the advantage, they look like and behave like a radio, offering the benefits of two-way radio with the coverage of a mobile phone:

I’m really impressed with CSE Chatterbox’s knowledge of the technologies available. They gave us exactly what we needed, in budget and quickly.

There are many potential applications for TurboVoice, particularly where two-way radio licences are difficult to obtain, where there are issues siting infrastructure (e.g. on listed buildings), where the layout or build materials of buildings make traditional radio infeasible, or where the requirement for radios is urgent or temporary.

People are used to not being restricted to an area when using their mobiles and will increasingly look for the same flexibility from radios, particularly when there is no compromise on audio quality in achieving this.

As TurboVoice does not require any infrastructure it is very easy to survey sites and for potential clients to see the radios in action. Because of this, and because there’s no need to arrange a licence, quotation to delivery for the 4G/LTE radios can be very quick.